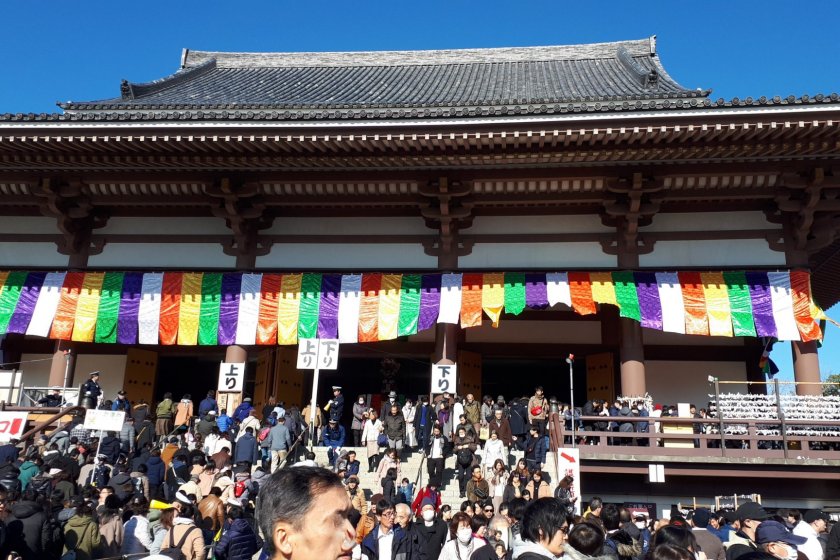 The crowds in full effect in front of the temple

Nishiarai Daishi Temple is a buzz of energy come the New Year with thousands of visitors flocking to this most famous of sites to see in the year with prayers and good hopes for things to come.

As you leave the local Daishimae Station and head down the short flight of stairs, you'll come across a street full to the brim with traditional yatai street stalls, all lined up next to each other as people squish and squirm their way through to the temple. A market bazaar atmosphere is certainly the order of the day and it is becomes a real thrill to wander amongst the stalls, picking up a takoyaki octopus snack here or perhaps a traditional sensu folding fan there.

It's not just the traditional that you will come across. We found ourselves at a stall selling paperweights in the form of insects encased in hardened gel. This was a curiosity that we didn't expect. Second hand vendors abound while in between them all can be found classical market stall games for the kids. New Year's here at Nishiarai Daishi is most definitely a festive occasion.

Of course, the main pull for the crowds is the temple itself. Said to have been established in the 9th century by Shingon Buddhism founder, Kobo Diashi, the story of its founding has it that the famous monk set up a statue of the Kannon and offered a fire ritual for 21 days to help the local people overcome an epidemic that was afflicting the region. Legend has it that a well of pure spring water started gushing, providing relief for the people and the name for the area, Nishiarai, which means 'new well of the west'.

The temple grounds include ponds, a 3-storey red tower and even a salt-covered jizo statue. Take a pinch of salt for your ills and if they heal, return with an offering of twice as much salt as you took. One mustn't forget the 700-year old wisteria plant. Well worth the visit, Nishiarai Daishi is one of Tokyo's most interesting and easy to visit temples, at any time of the year.

Take the Tobu Skytree Line to Nishiarai Station and change for the Tobu Daishi Line. The temple is a 2-minute walk from Daishimae Station. 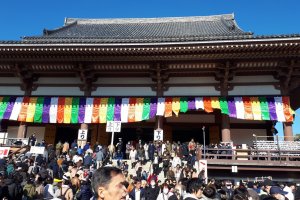 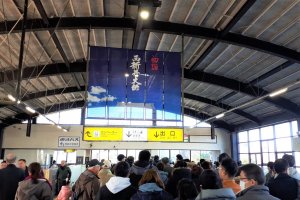 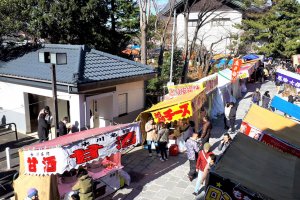 Elizabeth S a week ago
One New Year, I went to Nishiarai Daishi and the throng was huge. Kobo Daishi is ever popular.
Reply Show all 1 replies

Sleiman Azizi Author a week ago
Oh, it's just massive but I suspect it has more to do with the street layout. Either way, a great time to be had.
Reply

Sherilyn Siy a week ago
What is it about temple food stalls... they sell practically the same thing but they're still so tempting anyway. Tough to walk away without buying anything to munch on.
Reply Show all 1 replies