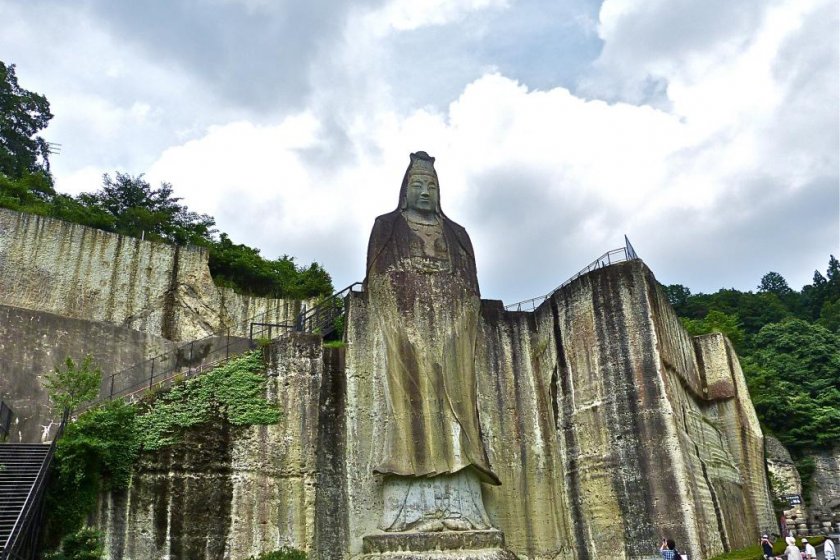 In the Ohya stone district in 1948 one stonemason began carving a giant Buddhist statue into a wall of rock. His name was Namizo Ueno. He had lost his two brothers in WWII and as he worked on the statue he prayed for world peace. But he soon ran out of funds and couldn’t continue his work. After that, the Ohya Tourist Association took over the project and asked a Professor Tobita—a sculptor, and professor at Tokyo National University of Fine Arts and Music—to complete the project. Tobita’s aesthetic sense would not accept Ueno’s previous work, and so he removed the head Ueno had already carved. Tobita started sculpting a new statue from the beginning with the support of a large team of assistants. The statue was entirely carved by hand and eventually finished in 1954. The statue was named Ohya Heiwa Kannon (the Peaceful Goddess of Mercy).

The statue is standing and measures 26.9m in height, 20m in girth, with a 5m tall face. It is equivalent in height to a nine-story building. You can go up some steps behind the statue, and view it from there as well. Near the statue, you can also view ruins of an old quarry. Beyond the statue, there are huge stone walls leading to the nearby Ohya-ji Temple.

After enjoying the statue, go through the stone walled corridor and turn left. You’ll soon see a temple on the right. It is Ohya-ji where an ancient skeleton was discovered in the cave of the temple in 1965. The cave also yielded ancient Buddhist stone carvings, various tools, and pots.

Go straight for a few minutes and turn right. Soon you’ll see peculiar craggy cliffs on both sides of the road. Walk a few minutes more until you reach a grass-covered field. This is Ohya Keikan Koen Park. It’s a good place to take a break. There are a few picnic tables here. The rock in front of you is natural Ohya stone and gives off a warm and soft feeling. You‘ll also see that it is extremely soft, warm and porous.

Frank Lloyd Wright designed the original Imperial Hotel Tokyo in 1921 using Ohya stone in a variety of ways. (The original Wright-designed hotel has since been moved to Meiji-mura Inuyama, Nagoya and reconstructed there.) He purchased one entire mountain in Ohya for the purpose of building the hotel.

Matsugamine Church in Utsunomiya, the work of Swiss architect Max Hinder, is also built of Ohya stone, giving the church a tranquil and calm atmosphere with their natural color tones.

Ohya stone originated from volcanic activity 20 million years ago. The volcano produced pumice stone fields in the northwest area of Utsunomiya. The fields are 8km from east to west, 37km from south to north, and reach 200 to 300 meters under the ground. The estimated stone reserves here are one billion tons. Some of mines are still open for business. Ohya stone is light, fireproof, and easy to process. This stone is exclusive to Ohya. High grade Ohya stone is beautifully white and its surface color doesn’t change even after a long time has passed.

How about strolling around this interesting place as a half-day excursion from Utsunomiya?

Japan is a small island nation, but we have a huge number of surprising things to discover here. Many of these delights can be found when you step off the main street onto small side paths. I really enjoy studying about and researching various aspects of traditional Japanese culture, and then sharing this information with visitors to Japan. I hope you will enjoy it, too! ARTICLE INDEX & PHOTOS:  An index of most of my Japan Travel articles can be found at the entry page of my blog, and my photos are shown here.  日本はとても小さな国ですが、大通りから一本小道に入ればたくさんの発見があります。日本人が積み重ねてきた歴史を学びながら、古い建物や庭を訪ね、物語の舞台となった景色を眺めて、皆様といっしょに日本文化の奥深さを探求していきたいと思います。 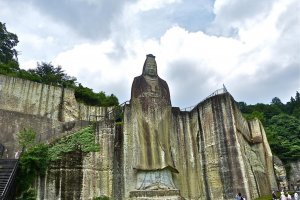 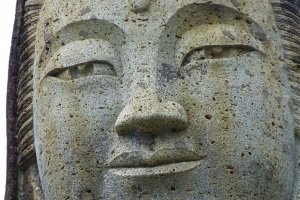 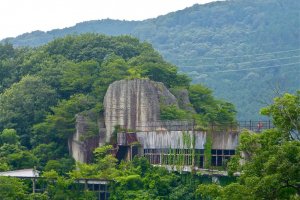 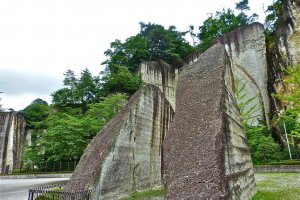 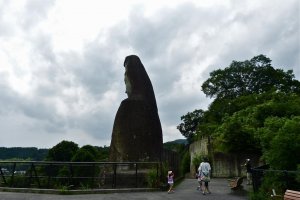 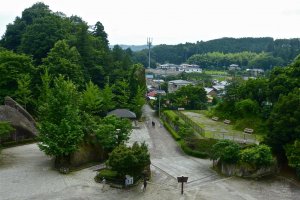