Cheap'n'cheerful eats right by the station

The day I arrived in Hamamatsu, it was just after lunchtime, so as soon as I was through the ticket gates I set about looking for somewhere to eat. I didn't have to go far: inside the Bic Camera building right under the tracks I found Kushitomo, a traditional old-school place with inexpensive lunch sets to be had.

It's pretty cosy inside, with just a few tables and eleven seats at the counter, where you can watch the bustling cooks at work or check out the ingredients, awaiting their fate on skewers in the display cases. It's very casual too, with lots of keep bottles of shochu and nihonshu around the counter and shelves, though they were playing refined classical music rather than the enka I'd have expected. It was pretty lively when I was there - lunchtime, of course - with a chatty mix of shoppers and office staff coming and going.

I went for the daily lunch set, which for ¥850 (plus tax) was a very good deal, generously sized but not too heavy. There was a selection of tasty breaded and deep-fried goodies on skewers, with three dips, plus rice, salad and pickles on the side, a plate of succulent sashimi with some memorably fierce wasabi, then finally a small dessert, all washed down with tea.

Desserts for ¥350-¥500 include ice cream and yuzu sherbet, beer costs around the same, soft drinks a little less. There are also long menus of what I guessed were the shochu ad nihonshu selections, which I understood next to nothing of, though some of the prices were pretty impressive.

It's not somewhere I'd go for a relaxed or romantic dinner, but it's a convenient, cheerful spot for a tasty, filling lunch, or to hang out and swap jokes with a bunch of friends. 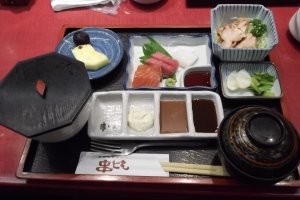 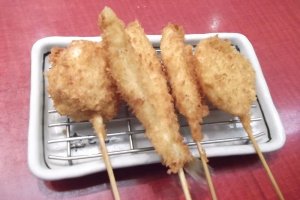 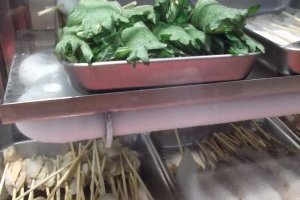 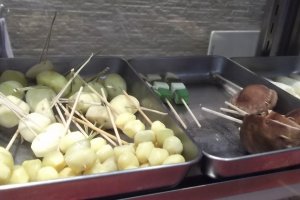 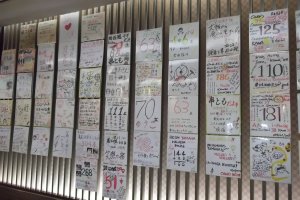 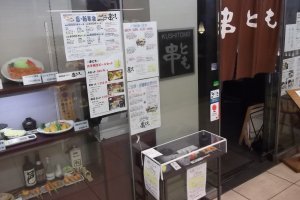