Life is a balance between rest and movement

Jan 16th 2020 – this year's event has been cancelled due to unfavourable weather conditions.

The Icicles of Ashigakubo in Saitama Prefecture are a thrilling addition to winter illuminations in Japan. Get a whole new perspective on illuminated glass—or in this case, ice—as you marvel at these colorful sculptures.

From early January to late February, the icicles in Yokoze Town can be viewed day or night—although the aura of night makes them even more enchanting. The icicles have been created—that’s right, created—by locals since 2014. After spraying water onto the small hill, the crystallized water is illuminated with an array of neon lights to make something spectacular.

These artificially made icicles are nonetheless beautiful and unique addition to the many, many illuminations in Japan. Being only a 90-minute train ride from Ikebukuro, the lighted ice makes a great little escape from the city. For a 300-yen entrance fee, wander up the icy hill to its summit for some of the most charming photos of the frosty display. Also included with the ticket is a hot drink of tea or amazake (traditional sweet rice drink).

Times vary by day of the week:

Superman’s Fortress of Solitude, with its soaring walls of sheer impregnable ice, is often depicted as being in ‘a polar waste’ - either the Arctic or Antarctic. Much too far away even for the most dedicated of fans.

However, if ever there was a closer location that could provide the same backdrop, it would be Ashigakubo in the Chichibu district of Saitama Prefecture, where a quiet valley has been transformed into a natural icy hideaway befitting the Man of Steel.

Brightly-colored flags announce your arrival and lead you on a short walk around the corner from Ashigakubo station to the simple entrance to the icicle park where a smiling, vigorously head-nodding elderly gentleman sits in a demountable building that has been converted into a ticket booth. The fee of 300 not only grants you access to the icicles but also a cup of either amazake (sweet hot sake) or hot tea and an even warmer welcome from local volunteers that staff the small rest area atop the central hill within the icicle park.

Almost there. Around another corner and through a tunnel that takes you to a world that seems much further away than simply the other side of the train tracks. Where the snow falls lazily wherever it or the wind pleases, accumulating upon itself and growing higher, colder, stronger in the shadows in different shades of white. Where evergreen leaves of the conifers contrast with the achromatic colors of the slowly transient scene surrounding them. Where a small stream meanders and babbles down the path of least resistance with a certain peace and clarity after having escaped the purgatory that we all had come to see. All coming together in a quiet valley framed by rivers of crystallized icicles rolling off tree and stone.

The scale of the icicles is immediately impressive. Though individually they are not necessarily any larger than the size of a person, being in the valley looking up at the hundreds of icicles at every crest gives a different sense of perspective. The icicles have formed at various places throughout but primarily on the opposing bank of a small stream, which allows you to get just close enough (but not too close). Like a glass screen at a museum or art gallery, that slight separation adds to the precious feeling of the moment.

The single pathway takes you across the face of the short valley and up the opposing hill offering you different vantage points of the icicles. It allows you to get up close and see the menace in the precision of the teeth of each icicle, as well as being able to soak in the graceful vista of smooth curves and flowing formations. Atop the opposing hill, great Chichibu hospitality is also on display to match. Wooden benches facing the main stretch of icicles make great locations for photos with a stunning background and equally great locations to gaze deeply into the ice in introspection. Cradling a cup of hot amazake, the crackle and pop of a burn barrel and the friendly laughter and banter among strangers and new friends rounds out the scene.

The icicle park is illuminated in the evenings during certain periods of the winter season and creates a different experience altogether, with bright colors projected upon the icicles and the scene carpeted with the soft yellow glow of small lights to guide you through.

Quite opposite from being a ‘polar waste’, Ashigakubo has been better known in times gone by as a favorite location for flowers and hiking trails in the spring, summer and fall. Directly opposite the icicle park is the entrance to a number of flower farms and fruit orchards which link up with hiking trails that will take you across the heights of the Chichibu ridgelines.

It was only in 2014 that the icicles were discovered and completed Ashigakubo’s seasonal calendar and, perhaps because of its relatively recent discovery, it is not overwhelmingly crowded or busy and still carries the feel of a local secret. However, as a result of its other attractions, the facilities at Ashigakubo are already well-established. A large roadside stop with ample parking, restaurants and souvenir shops makes life simple if you are driving. The train station of the same name is located right behind the road stop and may be an even easier choice compared with driving.

If Ashigakubo leaves you wanting more, the Onouchi Hyakkei Icicles and Misotsuchi Icicles are also located in the Chichibu area but are only accessible by car or bus.

Living lives of constant and increasing motion where one thing too often merges into everything, it is poignant to literally see motion suspended. The natural flow of the water forcefully paused against its will, expressions of motion crystallized and charged with an energy yearning to prevail in the race to its goal, is a poetic reminder that sometimes despite our agitations there is just as much virtue in rest as in work.

In its first appearance in the Superman comics, the Fortress of Solitude is recorded as having a giant steel diary within which Superman would record his thoughts. A visit to the Ashigakubo Icicles could easily be a worthy entry - in Superman’s diary or yours.

Living and working in Tokyo since January 2014 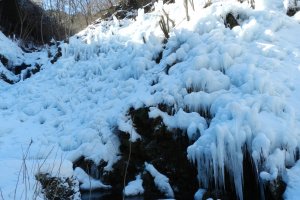 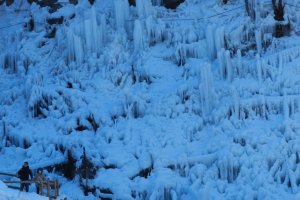 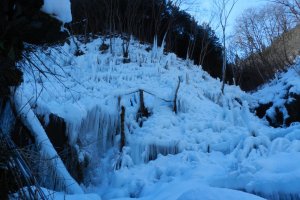 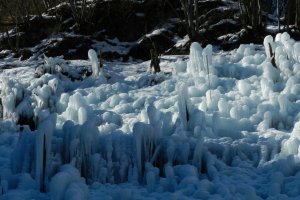 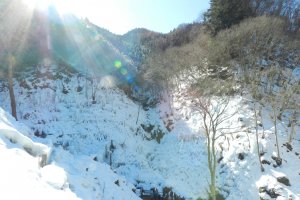 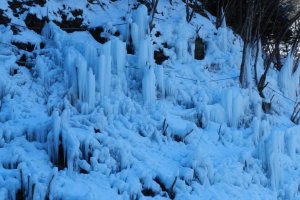 Jan 16th 2020 – this year's event has been cancelled due to unfavourable weather conditions.

Sherilyn Siy 2 years ago
I was there last Sunday on the last day of this event. Honestly, we went there because we were skeptical. "They're probably styrofoam icicles," we joked. But we got there and were impressed. Next year we plan to go at the beginning of the event rather than the tail end when most of the icicles have melted. We also plan to see the illumination at night.
Reply Show all 0 replies

Justin Velgus 3 years ago
I had no idea Saitama has this. Does Saitama get a good amount of snow as well?

Sherilyn Siy 2 years ago
Yes, but from what I saw, there's a manmade element to the icicles. I don't think it's 100% natural formation.